We are headed to Disney World tomorrow. My kids are 4 and 1. We went last year as well when my son was 3 and my baby was still in utero. We stayed in Orlando for a week. The week after we got back, a friend of mine was also going with her 3 year old. And since way back then I didn't have a blog, I wrote her an incredibly long email explaining the tips and advice we'd picked up having just spent a week at Disney World. Since we are going tomorrow, I thought I'd dig it out and remind myself what my Disney World advice for a 3-year-old-centered trip was. We may need to tweak some things since this year we will have a 4 year old and a just turned 1 year old. But what I really learned was... damn... was I a woman waiting for a blog or what? Talk about a long email. 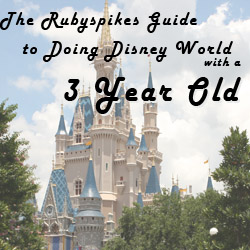 
Our Advice
After a couple days, we had a pretty good system going. Here is what we learned and what worked very well for us.


So that concludes my thesis on going to Disney World with a 3-Year-Old (or at least MY 3-Year-Old).  Now seriously... is it any wonder that I started a blog?
Posted by rubyspikes at 9:28 PM