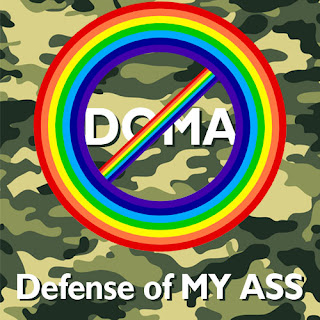 I try to write profanity-free. I'm not exactly profanity-free in my normal, walking-around-in-the world self, but I just think it looks icky on my blog. But right now, I am so annoyed that this is gonna be hard.  HARD!

So today I learned a couple things about DOMA, and in so doing, learned that I didn't really know much about DOMA in the first place. Basically, I knew that DOMA = the Defense of Marriage Act. I knew that it was passed by Congress and defined marriage by the Federal government as a union between a man and a woman. And I knew that it's a silly waste of time for the conservatives in this country who are trying dearly to cling to their definition of marriage when clearly the tide on this issue is moving against them. It's only a matter of time. OK, that last part was less fact than opinion. But anyway... So really what I thought of DOMA was that it was stupid and temporary.

With the repeal of Don't Ask Don't Tell, gay and lesbian Americans can now serve openly in the United States Armed Forces. Finally. Finally, your sexual preferences have nothing to do with whether you are able to serve your country. Finally, service personnel do not have to lie about who they are. Finally.

However, gay couples receive none of the marriage benefits that heterosexual service personnel receive. None. This is not because the military doesn't want to do it or the rules haven't kept up. It is because DOMA prevents any taxpayer money from going to pay any marriage benefits to same-sex couples. Some of the many things gay service members don't receive include:
Did you get those last ones? You volunteered to serve your country. You were deployed to a war zone,  and fought for your country while most Americans were sitting on their couches watching Dancing with the Stars, and then you were killed in action. And now the vocal minority of Americans who think that a commitment between two people of the same gender does more to destroy marriage than the 1 in 2 divorce rate among heterosexuals, have declared that the government cannot assist your spouse in attending your repatriation ceremony or save a burial plot for you in a military cemetery because they happen to be the same gender as you!!! What a freakin' CROCK!!!


And how about all those services denied to the families of living, gay service personnel? Your spouse can't come on base without an escort? You can't live on base with your family? Because (let's all put our head in the sand and pretend that) you're not really a family!?

I tell you what. If every SINGLE person who voted for and supports the Defense of Marriage Act agrees to serve a single tour in Afghanistan, I'll shut the hell up. But until that time, the brave Americans who are fighting and dying for our country should get every single benefit that they are due. Every. Single. Benefit.


These days it seems that everyone has a bucket list. I do not. While I am quite a lover of lists, I have decided that one thing I don’t need in my life is a list of things to accomplish before I die to make my life “complete.” Sure, I truly hope that I get to see France before I die. But if I don’t make it to le Midi because I “wasted” all my time in the American Midwest playing with my kids and "sleeping in" next to my husband, I shall still consider my life a great success.

So to serve as a reminder to myself to keep my days focused on the things that are truly important, at least to me, I created myself a Remember List. These are the things that I will try to Remember every day.