This past weekend we had absolutely no plans, so I decided to make Saturday a project day, inspired by a couple projects I saw on Pinterest. The first project was inspired by this:

It's a cute little jar filled with painted popsicle sticks with date night ideas. Super cute. But I wanted to do something with the kiddo, so I came up with this alternative. It became an entire day activity and kept us both entertained.

I had talked to the kid earlier in the week about what all of his storybooks had in common. We talked about characters and settings and how all the characters had a problem that they needed to solve. So on Saturday morning we headed out to buy some popsicle sticks and paint. We brought them home and painted 80 sticks four different colors, 20 of each. The painting project took about an hour. An activity that keeps the kid entertained for an hour is a win.

Once we were done painting the sticks, I had the kiddo gather some of his favorite books. 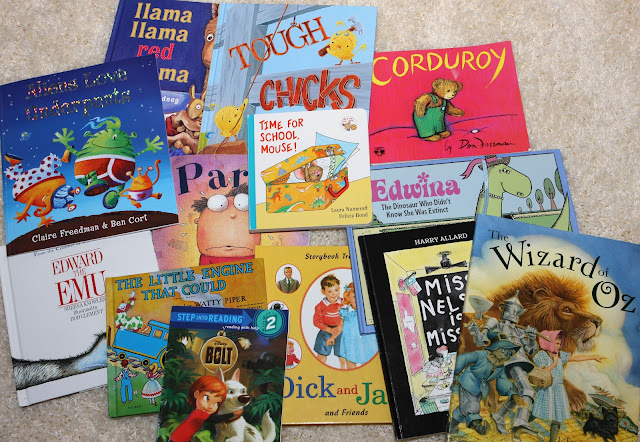 We spread out the books and the kid had to place one stick of each color onto each book. 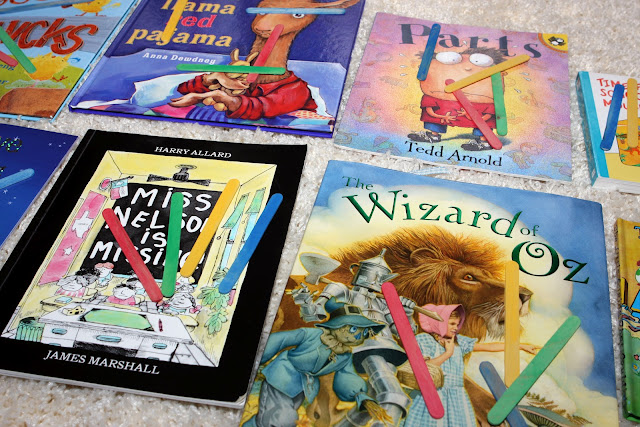 We then went through each book. For each one we wrote the main character on the yellow stick, the setting on the green stick, and the conflict on the red stick. For the blue stick, the kid could choose any other item that appeared in the story. 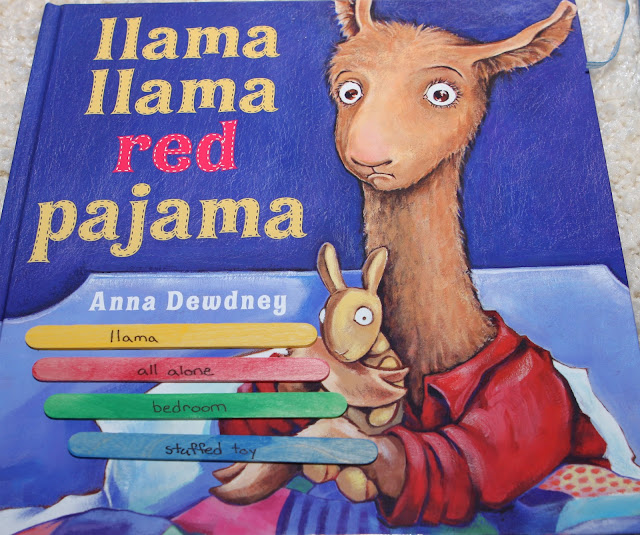 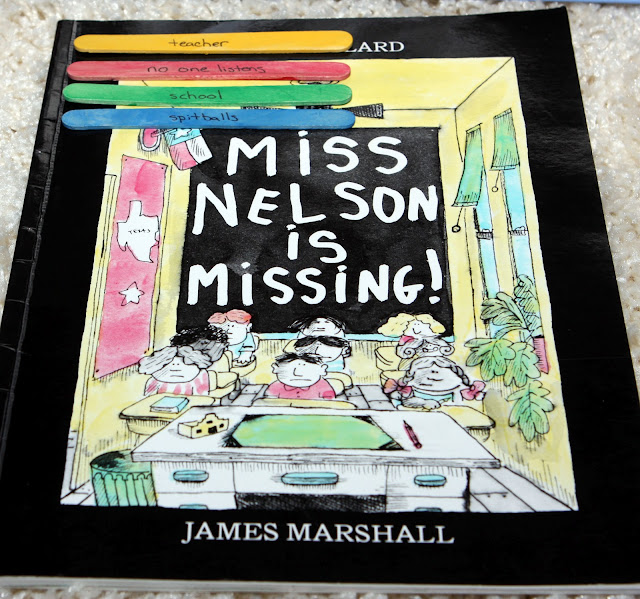 The blue sticks offset the fact that I was trying to keep the characters and conflicts and settings rather general, so I'd occasionally change what he suggested. So instead of Courderoy's conflict being that he "lost his button," I changed it to "lost something."

This activity amazingly kept him interested the whole time. It was worth the entire project just for this portion. He named the character, setting, and conflict in thirteen of his favorite books and he thought it was a game. Parenting win.

After we finished each of the books, we had extra sticks left over. We then came up with our own ideas for characters, settings, conflicts, and "special items" that could appear in stories. Conflicts were pretty tricky, so I came up with most of those. He did about half the characters and most of the settings and all of the "special items." When we were done, we had this: 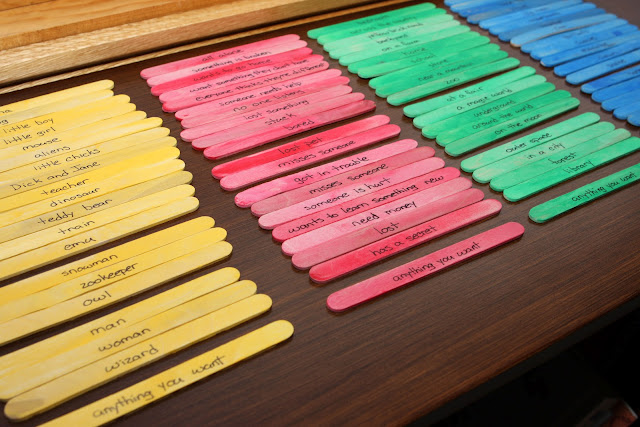 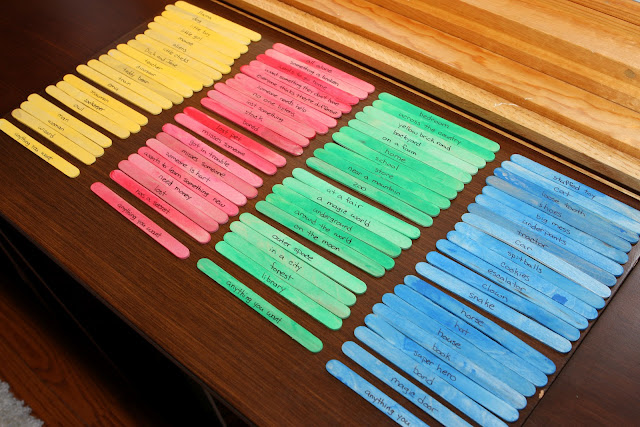 I made a little card that showed a little story arc and we looked at each of the books to see how each one had a character that tried multiple times to resolve a problem, and then finally did in the end. 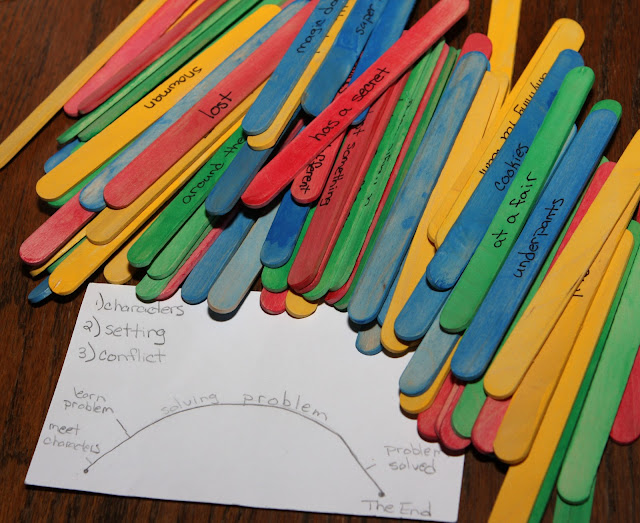 Now for the game. We stuck all the sticks into a tall tin. The game was to pull out one of each color and create a story using what you get. 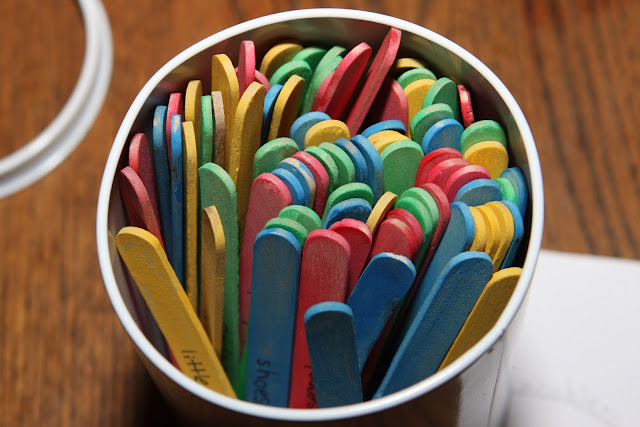 I wasn't sure if the project was going to die at this point, but he was really excited to play. Daddy went first, then the kid, then Mommy. Then we all went again. As a bonus, I think he'll actually want to play again.

If you're interested, you can check out the kid's first story here: Story Sticks: The Bored Wizard.
Posted by rubyspikes at 4:40 PM

What type of paint did you use? Spray paint or Crayola style paint. Great idea!

I love this idea. Thanks for sharing!

This is an awesome idea! I will certainly use this ASAP. Thanks

Love this concept, and will be using these at camp with my girl scouts for their "it's your story " Journey :-) Thank you for sharing. @ Reika, you can buy the sticks already apinted , I got mine thorugh an awesome company called Discount School supply.

I couldn't find colored sticks so I tossed mine in plastic freezer bags with food coloring and rubbing alcohol.

I was thinking of using this with my Drama students. They always tell me they can't think of anything. This would be a great way to give them the push they need to write a scene!

Brilliant! I am a brand new high school English teacher and this project is headed to the top of my Writer Workshop idea list!!

What a great idea. I will have my students read a book, fill in the sticks, draw a cover page and put in the hallway for display. Thank you! and of course use them to write stories.

I love this idea!! My 8th grade students enjoy creative writing and this will be a perfect writing exercise! I'll be using it very soon!

The Dollar Tree has colored sticks

how old a kid can do it?

Thanks for sharing!! Great idea!!

I love this idea for the summer!

Thank you so much for this great idea. I am a second year 7th grade ELA teacher and I want to have creative activities for my students when they finish their class work. Thanks so much!

I will use this idea to create social stories with my high school level Life Skills kids. Nice idea to practice, rehearse, and resolve social, behavioral, community, skills. Red sticks can represent conflicts they encounter in various settings in school and the community.

I'm always looking for activities like this to keep on hand for subbing assignments. I'm adding this to my sub kit!!

Really informative. I have been working on several art projects for my class. I think your idea will be very suitable for Kids of grade one. I believe learning in a fun way is very important For kids. i just ordered a bundle of paint sticks from http://woodpaintsticks.com/wood-craft/ and I am going to write bible quotes on them.

This is a WONDERFUL idea! Love it!
Heidi Butkus

I have decided to stick with love. Hate is too great a burden to bear. See the link below for more info

Really informative. I have been working on several art projects for my class. I think your idea will be very suitable for Kids of grade one.
Best Attitude Status

Great article ...Thanks for your great information, the contents are quite interesting. I will be waiting for your next post.