How Wrong I Was

I am writing this post from my iPhone. This is not the easiest way to write a blog post, but I am doing so because I am trapped under my sleeping 6 year old. Trapped in his bedroom, lying on his bed, with his little body planted squarely on top of me, his arms extending on either side of him and wrapped loosely around me. I was lying next to him at bedtime and mentioned that I would be leaving soon. He then crawled on top of me to prevent my departure and fell asleep about three minutes later. I can extract myself, and will... shortly. For now, I am lying here, soaking in the moment, and contemplating how very differently my pre-mom self would have viewed my current predicament.

We all change when we have kids. We all think we know exactly what kind of parent we'll be. In many ways, I actually am that parent my pre-child self envisioned. But in many other ways, I am not. Pre-child me would probably have seen this, my being trapped under my sleeping child, as a sign that I had caved, given in to the pressures of parenting and a failure to live up to my own standards. Not entirely inaccurate, but there's more to it.

I remember when pre-child me was talking to a mother about her young child's bedtime routine. The parents had moved a twin bed into the child's room because they inevitably ended up lying with the child in his room until he fell asleep. The twin bed was just for the parents. This, swore pre-child me, would NEVER be me. A child is capable of falling asleep on their own and it is a disservice to the child to not teach him to do so. Also, what are the implications to your child's view of the world when you move furniture and modify your own evening schedule to accommodate their wishes.

This is the ideal of parenting I held when my first child was born. Thus, he was able to sleep through the night at 8 months. We put him in his crib, he cried briefly, then fell asleep. He was a great sleeper and a very happy baby. When he eventually learned to get out of his bed on his own, he quickly learned that he was to stay in his own bedroom until we came in to get him at 7. By the time he was 3, I was sure I had the child sleeping thing nailed.

And then I had my second child and things changed. No, it was not the added draw of my time, juggling two children, or the plain old exhaustion that changed me. It was seeing that tiny baby and realizing that my nearly four year had grown so very much and so quickly. It made me realize with starker focus, that time wasn't just flying by, it was racing. And suddenly my view of parenting changed dramatically.

My 4 year old would wake in the middle of the night and want to sleep in our bed, and instead of thinking "it's really best for him if he sleeps in his own bed," I instead could only see my sweet child and the fact that I really only had a few more years left when he'd even WANT to sleep with me. My child was asking to lie next to me in bed, put his arms around me, and feel safe and comfortable and loved. How had I ever viewed this as unhealthy for him? I'm a grown up and I'm much more comfortable sleeping next to my husband than sleeping all alone. Of course my child feels the same way! So now I not only "let" him join us in bed, I embrace the occasions. For this time will be so brief, I intend to take every opportunity I can to ensure that my sons feel all the love I can give them.

Go ahead, pre-child me, roll your eyes. I've "given in" to the idea of a "family bed." But I'll take an occasional night of less than restful sleep (as I'm kicked and slept on), because every time he wakes me up, I use it as an extra opportunity to wrap my arms around him savor these moments. Because eventually he will become.... a teenager. 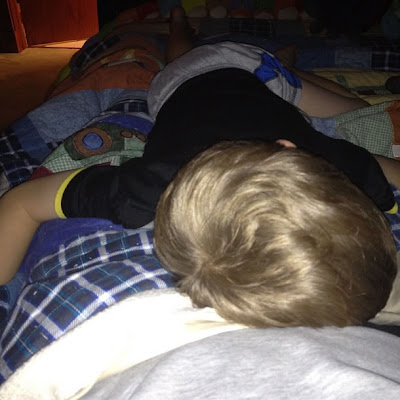 Posted by rubyspikes at 7:21 PM

It's ironic that I was having this exact conversation with one of my mom friends yesterday! I was the one saying I will let my baby cry. Thanks for making me tear up. So freaking cute.

Thanks for sharing this interesting posting about cloths it is very useful for me.
Yüz Germe

Thank you for this! We have a family bed. Our son will "hold" us if he feels us getting up...It makes intimacy a challenge to say the least, but I know we will miss him terribly when he is on his own, and it will happen before we know it.

What a sweet post. I feel the same way. I didn't have a lot of pre-conceived notions about the kind of mom I'd be. All my whack-a-doo ideas showed up the month after my first baby was born. I had so many square pegs not fitting into round holes and kept feeling like I was failing. It's so nice when you can finally just say, "You know what? It doesn't go fast like the old people say it does, but each stage is really so brief, so savor it." I try to remember that. And now I'M the one who crawls into bed with one of the kids each night. As long as they'll let me, I'll keep escaping the snores of my husband and sneaking in just one more night of snuggling.

I love your blog.. very nice colors & theme. Did you create this website yourself or did you hire someone to do it for you? Plz reply back as I'm looking to create my own blog and would like to know wheere u got this from. thanks
Rinoplasti

Great work! Awesome site and a real wealth of information that should come in handy. I read in your post that you don’t have the energy to post, C’mon dude, this stuff is great!Septorinoplasti

Thank you for this! We have a family bed. Our son will "hold" us if he feels us getting up...It makes intimacy a challenge to say the least, but I know we will miss him terribly when he is on his own, and it will happen before we know it.Sarcasm puns and jokes !

Your blog is so helpful and informative. Thanks for sharing your thoughts.

Thanks for your information. Please accept my comments to still connect with your blog. And we can exchange backlinks if you need. True Story: I Swear By This Trick to Fall Asleep Fast