If I Ran the Zoo

I was the chaperone for my 4 year old's zoo field trip today. Overall, it was a really great day. Great weather. Great kids. Great time. But if you wanted to read about sunshine and rainbows, you'd be reading my other blog, where I've already posted about what a good time I had today with my kid. (Little Ants: Field Trip Chaperone) 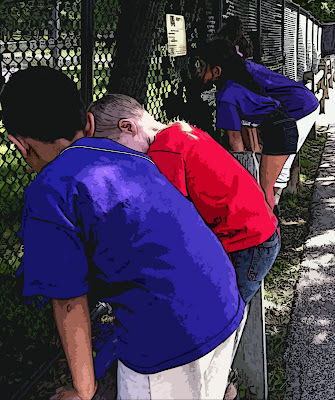 So while it was a good day, a great day really, I still would like to offer some advice to the folks that run the zoo. First, let me write their disclaimer for them: it is a free zoo. So really, I've got no business complaining. But like that's gonna' stop me.

We had a great morning of looking at all the animals, from bald eagles to crocodiles to wolves. We had a great time eating lunch in the shaded picnic area and running around in the grass and under the trees. While eating lunch, we saw a tram go by. (And by tram I mean like those bus/train things with passenger cars that are linked up and pulled around the zoo.) The kids got excited and the teacher suggested that we ride the free tram as a last treat before boarding the buses to go back to school.

So I gathered my four charges, including my son, ranging in age from 4 to 6, and we head to the zoo entrance where the tram boards. As we arrive, the tram is full and is about to leave. We get in line and will be on the next ride. We wait. And wait. And wait. I could go on. Suffice it to say, it was excruciating. Like Disney World, only without ever moving or walking past depictions of Peter Pan or Buzz Lightyear and without the promise of being able to fly on Dumbo. There is a large, grumpy (and I mean seriously grumpy) woman who walks down the line every 5 minutes to tell the kids not to climb on the barricade. I completely support her reprimanding the children. I did not support her glowering at them as though they were vandals. If you don't like kids, how about you don't get a job at the free zoo.

After 15 minutes standing in the sun, the poor kids were getting more than a little restless. Most of the other moms were doing their best to just keep the kids from climbing all over the barricades and flower boxes. I decided to try a game of I Spy. It was tough. Kinda' like standing in the middle of a forest and saying, "I spy with my little eye something.... green." Yeah, it was exciting. But we used the kids clothes and it kept them occupied for five minutes. Then we played the Where-Is-The-Tram game, where we imagined why the tram was taking so long. We imagined that it got lost or went to the moon or got carried away by a swarm of angry butterflies. (We would soon learn the tragic answer.) After 20-25 minutes, the tram finally arrives. The swarm of field trip kids (the only kids in line) start jumping with excitement. The tram stops and we all begin to move toward the "gate" to board. As we pass Madame Grumpy, she informs each of the adults that they are only allowed two children per adult. Really? We've been standing here for 20 minutes? Every child is wearing the exact same purple shirt. Every adult has approximately 4 children in their care. What are we supposed to do now, Madame Grumpy, choose two children to leave behind, or tell them that after standing in the most boring spot in the entire zoo for twenty minutes that we do not get to ride the tram? How about none of the above? How about I'm putting the children on the tram and you can take a step back? Yeah, that's what we did.

Anywho, we all got on the tram. Then Madame Grumpy got into the drivers seat and just sat there. At first I didn't realize why we weren't moving, but then I noticed that some teenage kid at the back of the tram was giving some sort of speech that was coming out through some really crummy speakers on the tram cars. So we were waiting for the point in the speech where we could begin driving. His speech went something like this:

Oh, God! Dude, Open! Your! Eyes! The tram is filled with 5 year olds. No one cares when the park was founded. Just drive the tram. We need a 10 minute ride to make the kids happy!

Finally the tram starts driving. Mr. Monotone never once says, "Hey, kids! Look! An elk!" That's because A) he was an idiot and B) the tram almost immediately left the zoo area and began driving around the surrounding park. For twenty minutes! Driving past practically nothing! A pond with nothing in it. No animals. No boats. Just weeds. A highlight was an "super tall" (7 story) apartment building which we passed twice. Again, after 15 minutes, the poor kids are bored to tears. I try to engage them.


Me: (to the kids) Isn't the tram cool?
Kid: No.
Me: But haven't we seen some cool stuff? We saw those ducks!
Kid: Yeah. I guess.
Me: Oooh! And look over there! A really big pile of rocks!

At this point I don't know what the kid responded because the mom behind me starts cracking up. Seriously folks, the pile of debris was a highlight at that point.

Well, the tram ride from hell finally ended. We got off the tram and by then it was time to go. I herded the kids toward the bus. We were the first ones on the bus and two of the kids needed to use the bathroom. So I got them off the bus, walked with them to the visitors center, followed the signs to the bathrooms, and opened the bathroom door and led the two kids in to find...

Only two stalls AND two lines of women and children: a shorter line from the door I had entered and a longer line out the other door on the other side of the bathroom. So after a few women from the other line took an open stall every time it opened, the somewhat insecure teenage girls in front of me turned to ask me what to do since they had been reportedly waiting quite a while even though they were at the front of the "short" line. I told them that we were now alternating lines and that the next stall that opened was theirs. When they did take the open stall, I then got glares from all the other moms in the longer line. To them, I would like to say the following:


WHAT? I followed the signs to the bathroom and entered to find a line on this side and that side. It is not my fault some idiot designed a public bathroom with two doors on different sides. Did you want me to walk back out and around the gift shop to get to the back of your line? I'm sorry, no. We're alternating. Also, every child in the bathroom was wearing the same purple shirt. So guess what, even if I wait for every one of you to go first and we wait here until the end time, you are gonna have to wait for these two kids with me to go pee, because I'm pretty sure they're not gonna' let the buses leave until all the kids are on them. So chill out!

Posted by rubyspikes at 9:38 PM